Do you love Final Fantasy games? Ever wish you could spend time in one of its magical realms? Then visiting Final Fantasy Eorzea Cafe in Akihabara is a no-brainer. Our guide shows you how to get tickets and what to expect on your visit. 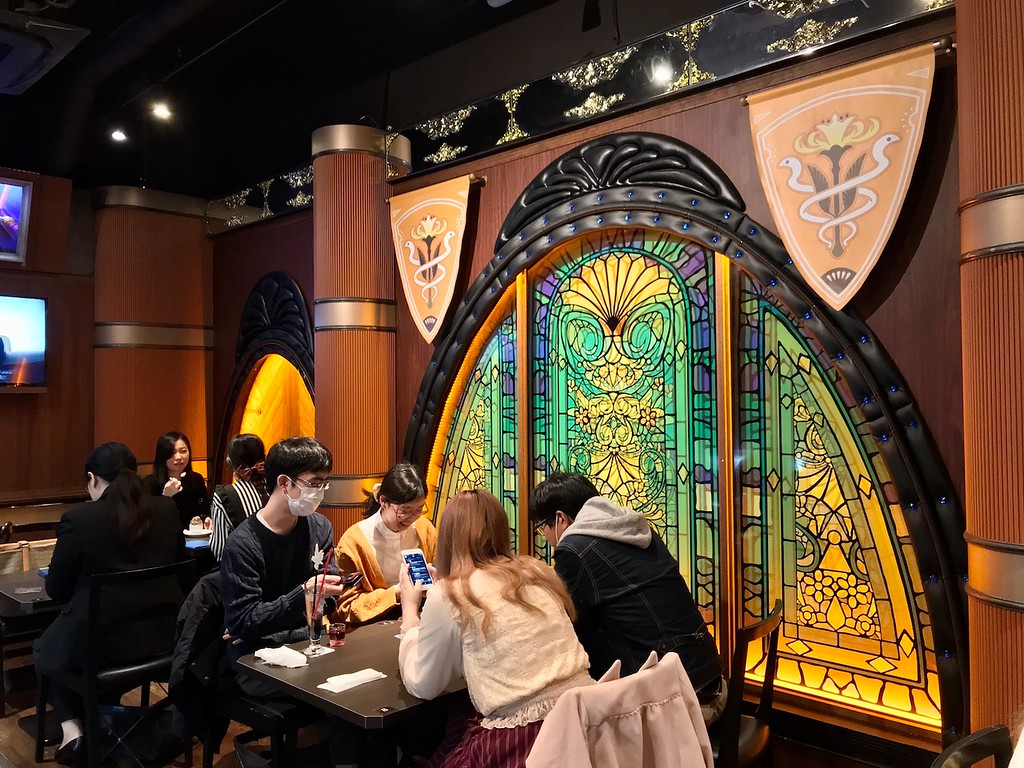 Have you ever wished you could spend time in your favourite fictional world or magical realm? Wouldn’t it be incredible to eat dishes you’ve only ever seen in games, or find some cool items made three-dimensional from the screen? Themed spaces allow you to suspend reality for a moment and play make-believe. One such space in Akihabara is the Final Fantasy Eorzea Cafe. 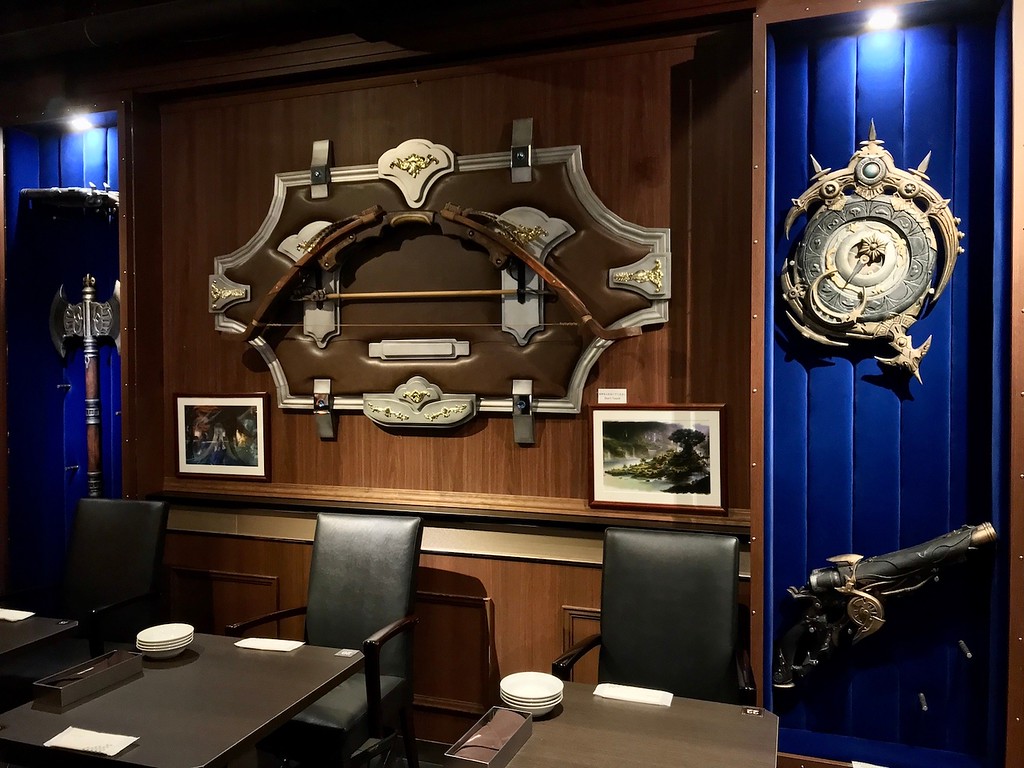 Capitalizing on the wildly popular science fantasy media franchise, the cafe’s name––Eorzea––refers to the fictional region in which Final Fantasy is set. The interior is modelled on Carline Canopy from the city-state of Gridania in Final Fantasy XIV, complete with weaponry on the walls and a gorgeously ornate stained glass window. The background music is, of course, the soundtrack from FFXIV.

As you can imagine, the attention to detail here is second-to-none. The cafe is popular with Final Fantasy fans domestically and abroad, especially for those who have played FFXIV.

This guide contains the following sections: 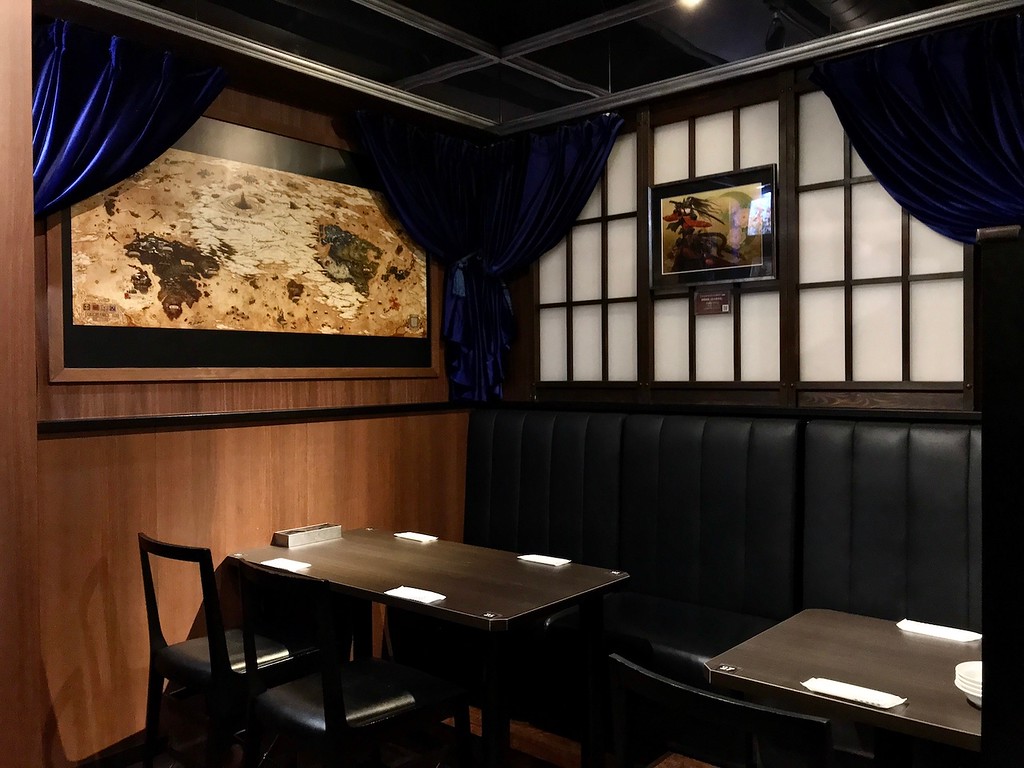 Part of the dining space in the cafe. - image © Florentyna Leow

The cafe itself is a fairly small space, and they have a limited number of seats for each time slot per day. Each time slot is two hours long. As such, dining here typically requires advance reservations.

If you live in Japan and speak Japanese, the easiest way to buy tickets is from the Loppi ticket machines at any Lawson’s convenience store. However, if you’re visiting from abroad, the best option is to use a third-party booking service. Not only will they purchase your tickets ahead of time, they’ll deliver them to the concierge at your hotel. 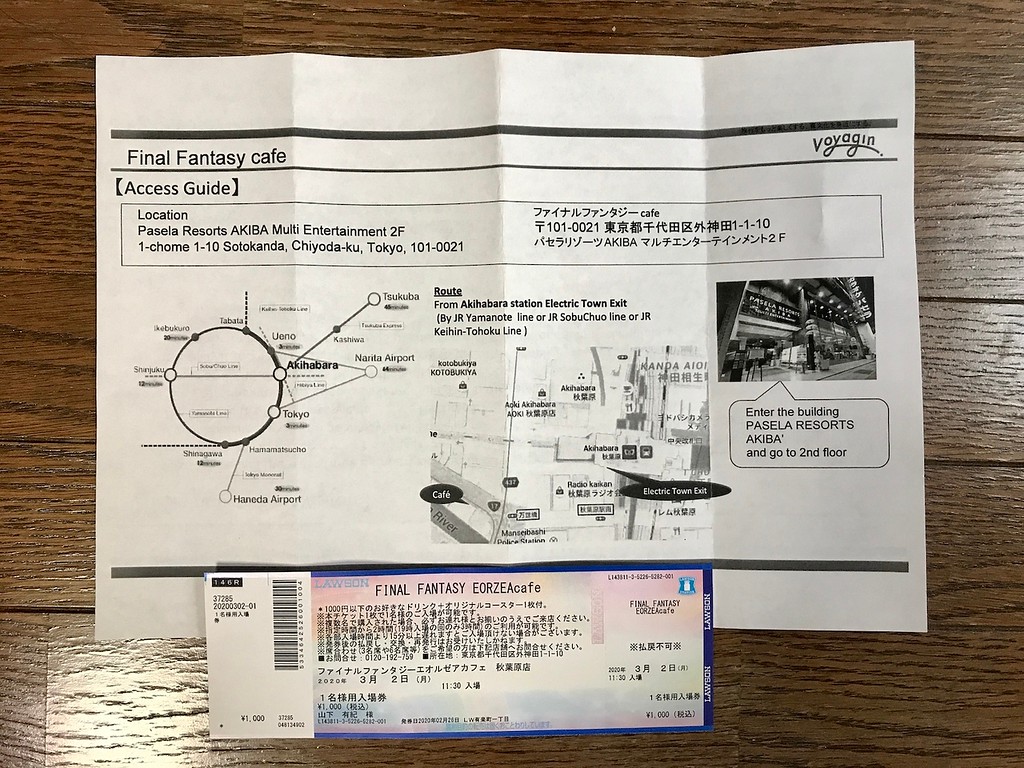 Yes, the service does cost more than buying tickets from a Loppi ticket machine but it’s worth it for a) the convenience and b) not having to struggle through Japanese-only instructions. The staff also include a map to the cafe along with your ticket––how helpful is that? Your reservation also includes a free drink.

When buying your tickets online, you may be asked to provide a list of available dates. You then choose from them, including the time slots during the day. It’s a popular cafe, so you’ll want to book as far ahead as you can, and be as flexible with your dates as possible.

As you can imagine, it is easier to book at short notice for weekdays and during off-peak hours, e.g. mid-afternoon at 2:30pm or 4:00pm. But more popular time slots like 11:30am or 7:00pm may need advance notice. 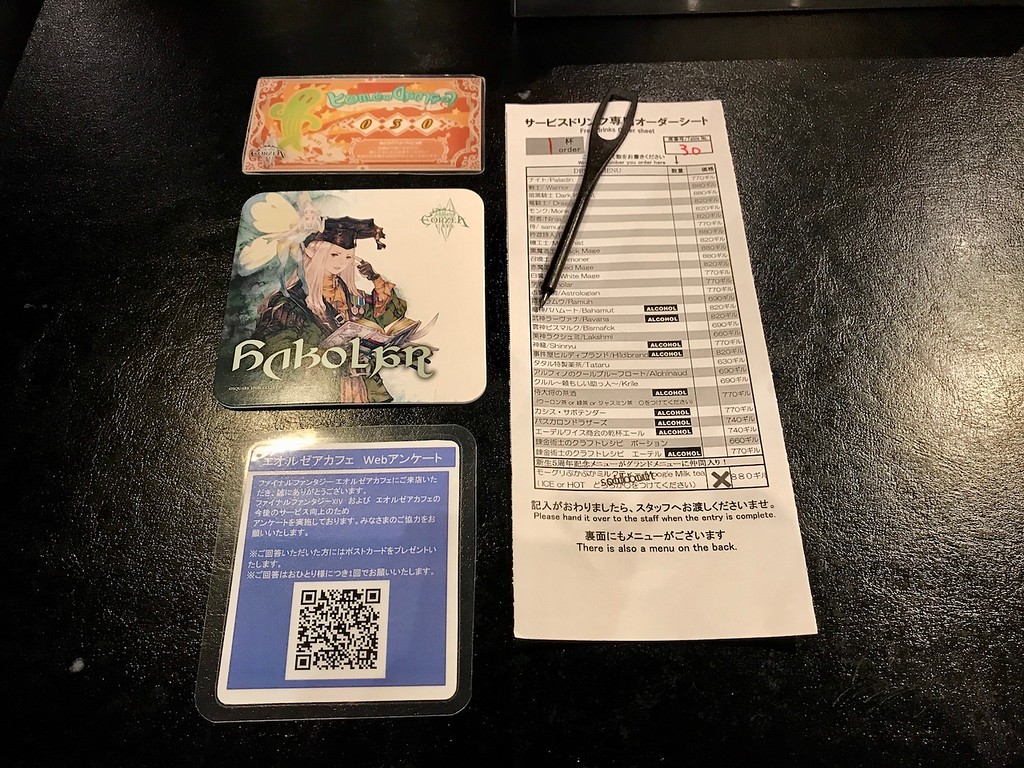 Visitors also get to pick from a variety of designs for your first complimentary collectible coaster. - image © Florentyna Leow

Once you arrive at Eorzea Cafe, hand over your tickets to the counter staff. If you speak Japanese, they’ll give you a mini-iPad, which you use to order food and drinks. You also get a free FF-themed collectible coaster––in fact, they give you one with every dish ordered––a numbered ticket, and a drinks menu. This is for your free drink. 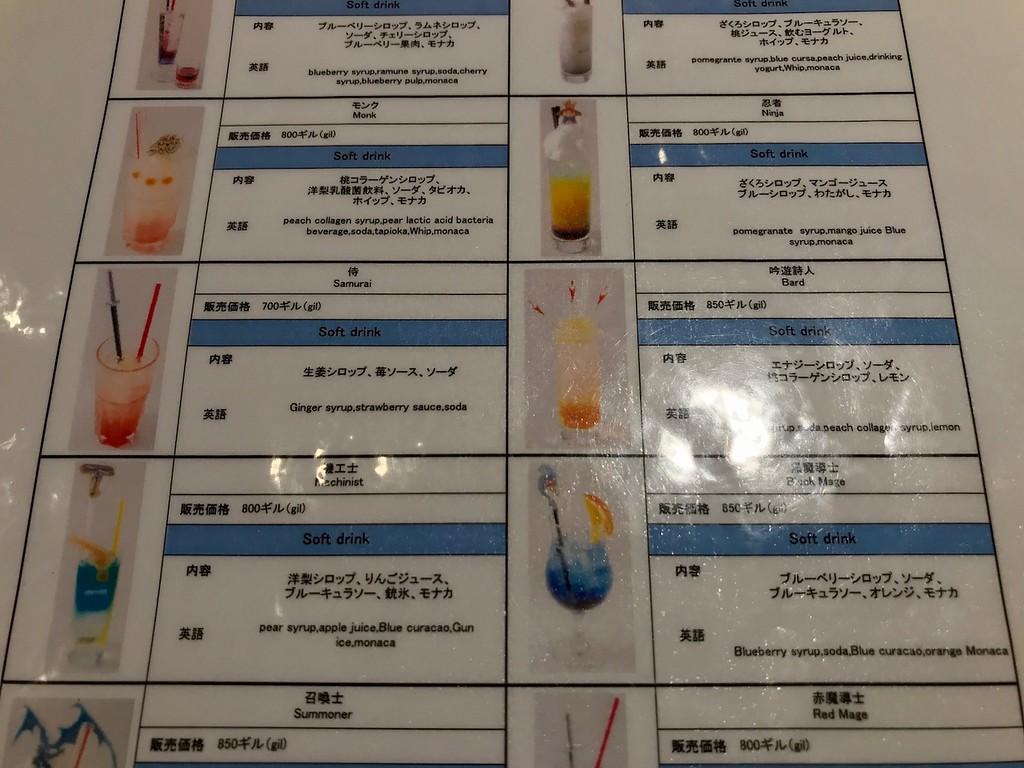 Luckily, not all is lost if you don’t speak Japanese. They’ve prepared English translations of the menu for non-Japanese speakers. The menu has obviously been machine translated, but you can at least get the gist of what’s being communicated. Having photos helps. 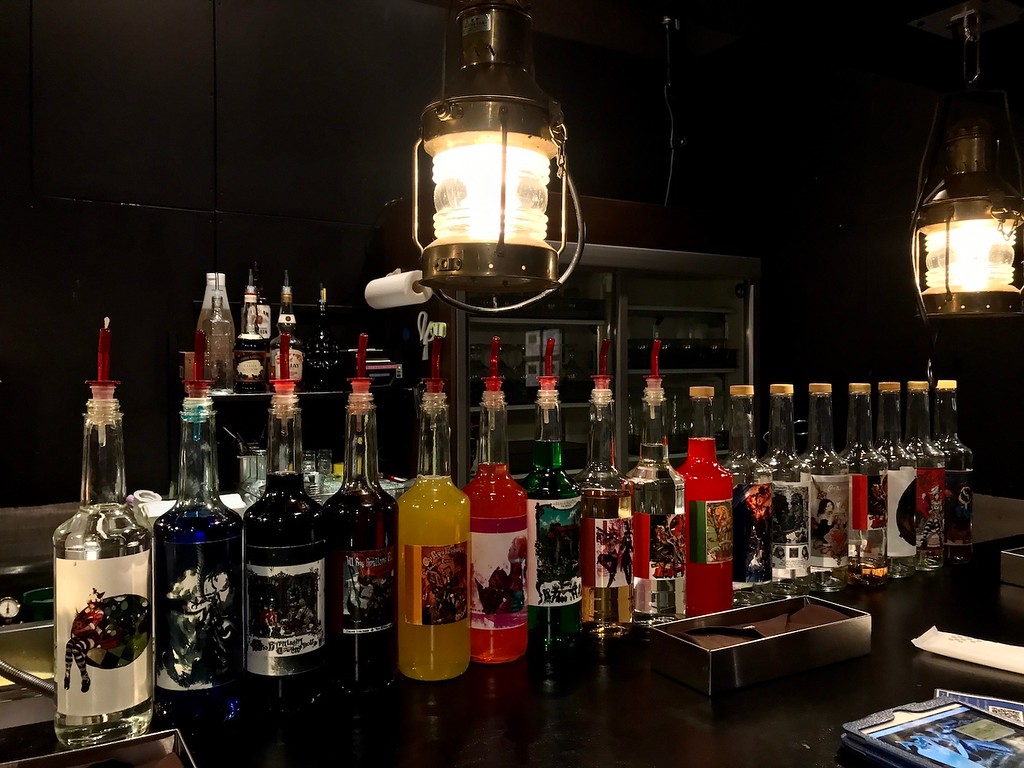 Solo diners will be seated at the bar, with its row of luridly-coloured syrups. - image © Florentyna Leow

At the start of the two-hour time slot, one of the staff members will give an overview of what’s going to happen. The numbered ticket you received earlier is for the ‘cactpot’ lottery held at this point. One or two lucky guests will receive a grand prize––a Final Fantasy-themed dessert consisting (among other things) of a stack of pancakes, whipped cream, and honey toast. 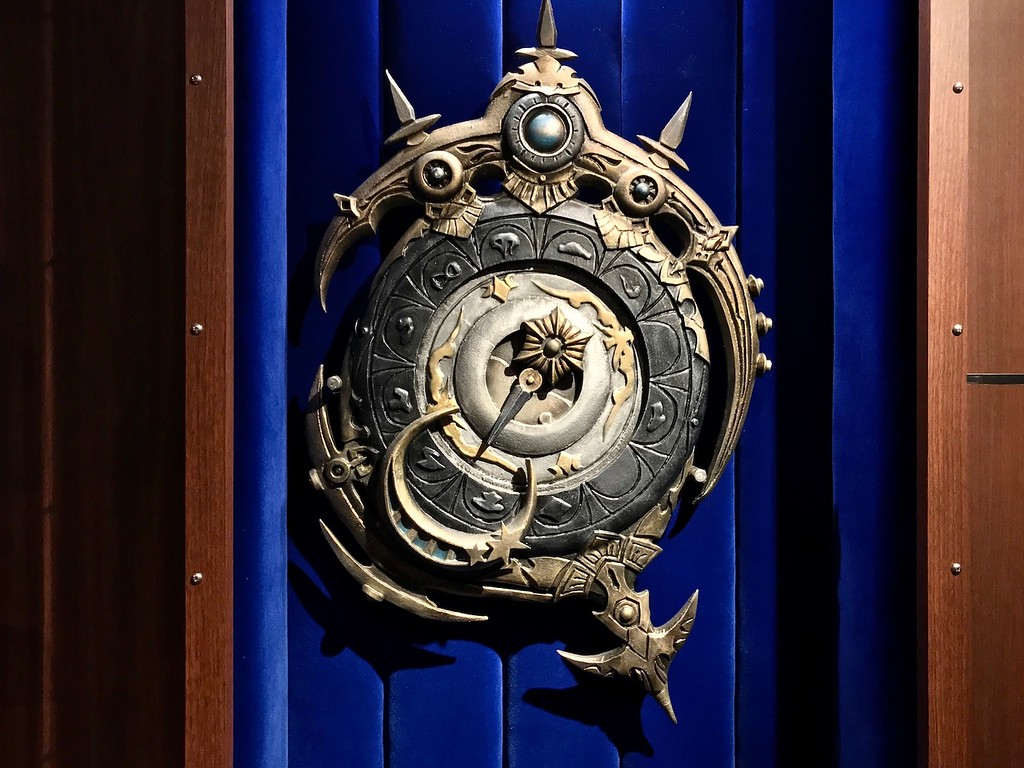 One of the weapons decorating the world. - image © Florentyna Leow

Even if you’re not a major fan of the games, the decorations are pretty impressive. The weapons on the wall are beautifully made, with lovely ornate details on them. 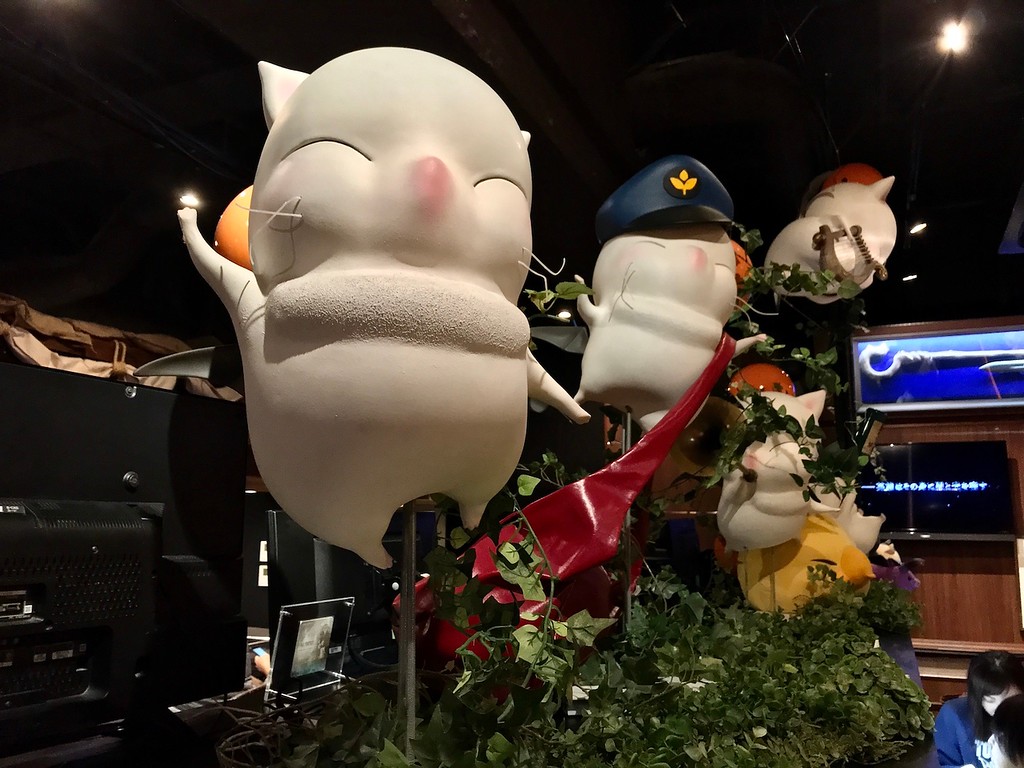 Fans of the series will know exactly what the catlike creatures suspended in the air are––‘moogles.’ Even if you don’t, you can’t deny that they’re pretty darn cute. 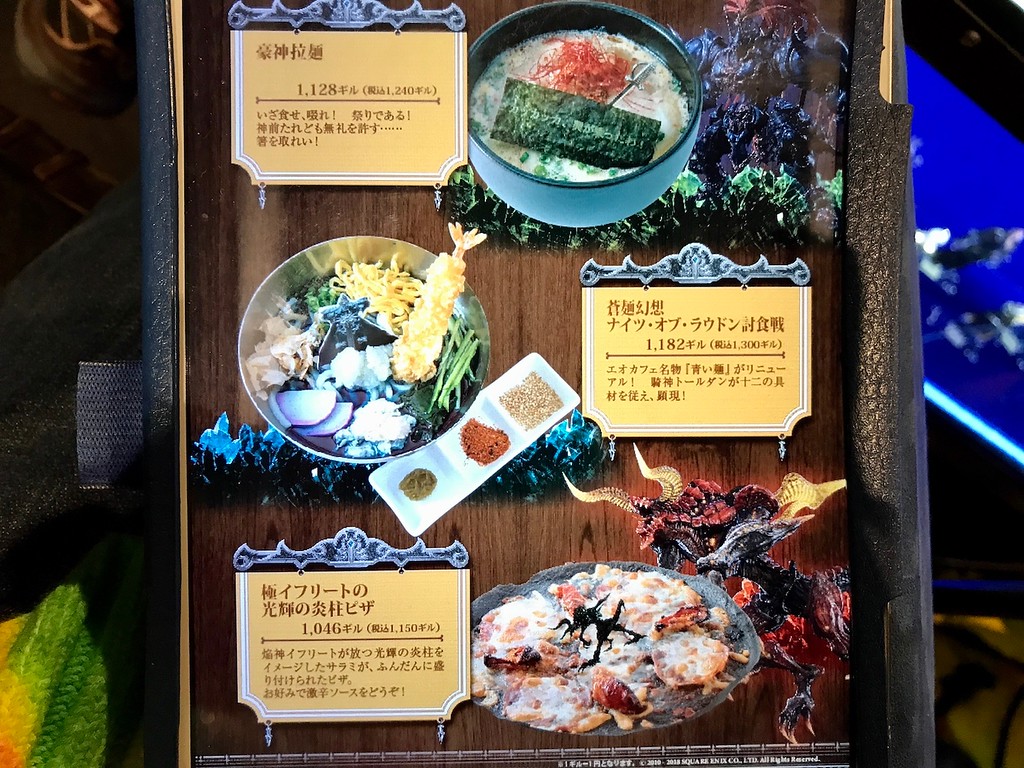 Having photos makes it easy to order from the tablet even if you don’t speak Japanese. - image © Florentyna Leow

This being a FF-themed cafe, food and drink options on the menu are suitably fantastical, and all of them make references in one way or another to characters and concepts in the game. The menu often changes, based on submissions by fans on what they’d like to eat at the cafe. Eorzea Cafe comes up with new dishes and drinks inspired by these suggestions. They’re pretty imaginative: think Dragon-Eye Croquettes, Ravana’s Spicy Mapo Tofu, or Namazu Mizu Manju. 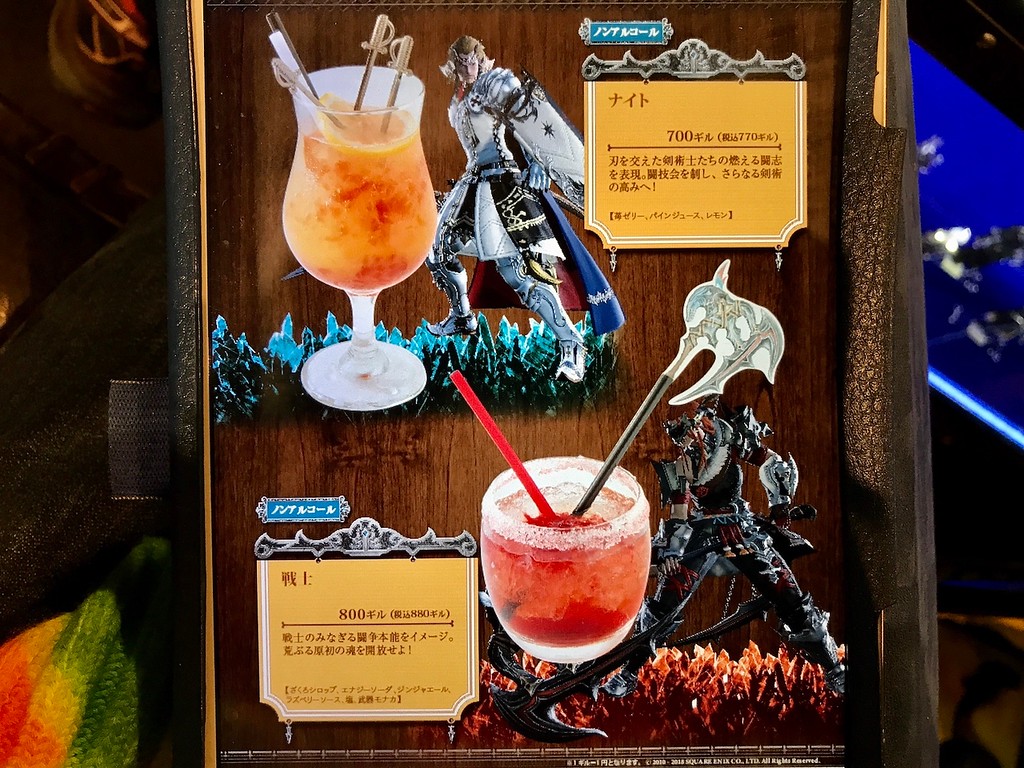 Many of the drinks here are vibrant shades of the rainbow and pretty sugary to boot. Think concoctions of jelly, crushed ice, bottled fruit juices, ginger ale, soda, syrups, and more. Perfect if that’s your kind of thing. As with the food, they all have evocative names to fire up the imagination: White Mage, Ninja Amazake, Astrologian, Dragoon, Bard, Blue Tamamizu Soda, Alphinaud’s Cool Blue Float, Bismarck the Ruler of the Clouds. 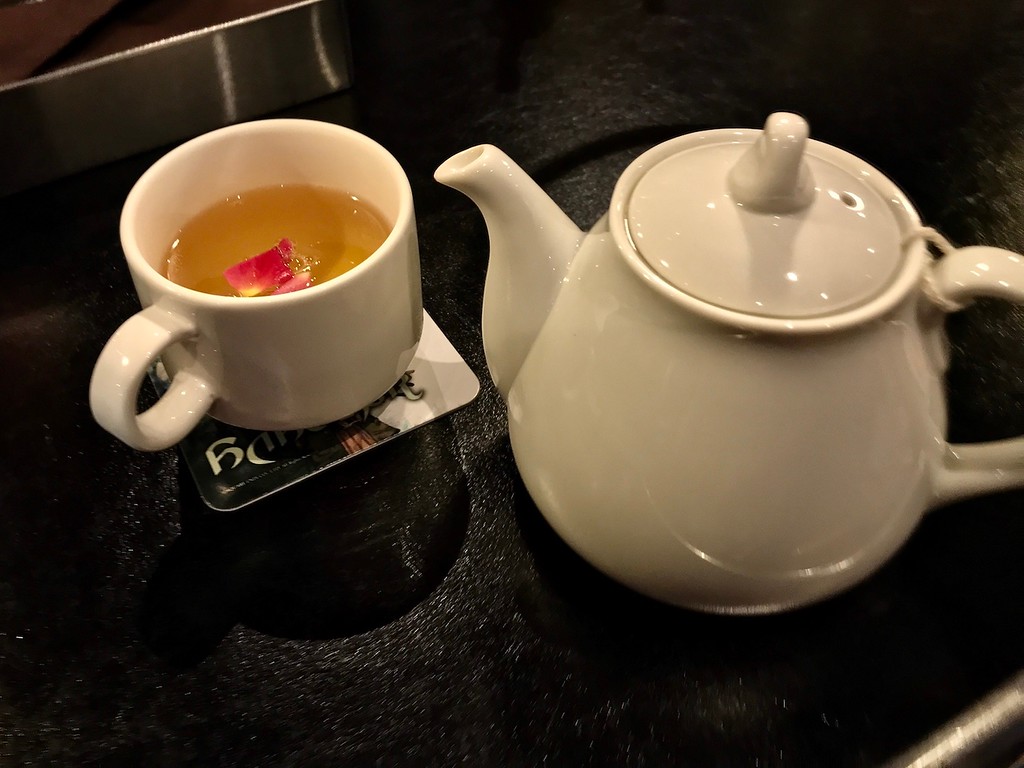 This might have been the only non-sugary Final Fantasy-themed drink on the menu––Tataru’s Herb Tea with Flower Petals. The petals were a nice touch to an otherwise ordinary pot of tea. 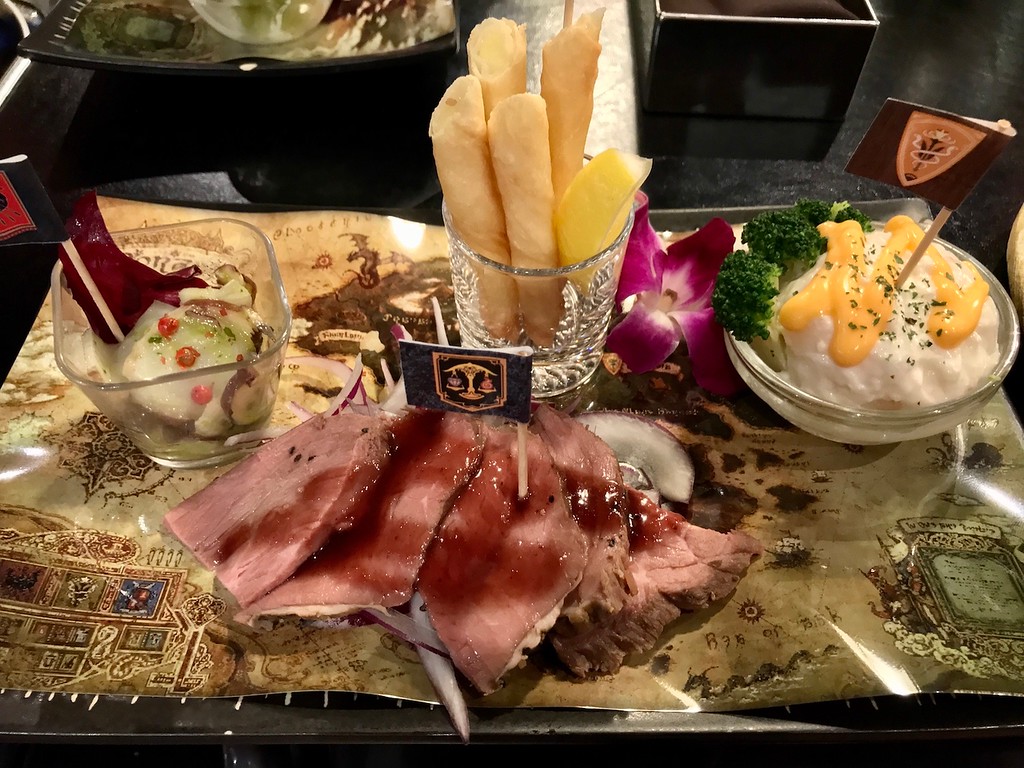 The Eorzea hors d’oeuvre platter is really best for sharing rather than eating on one’s own! - image © Florentyna Leow 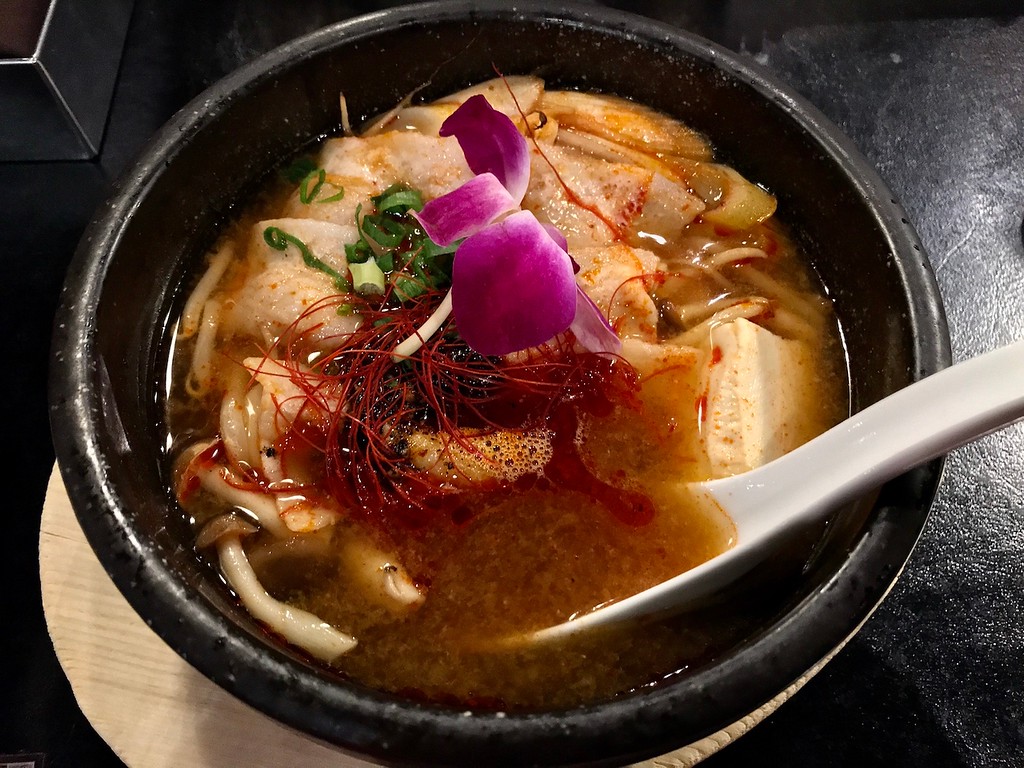 The soup even comes with a flower on top. - image © Florentyna Leow

This is a bowl of Yotsuyu's Tyranny ~Red and Black Soft Tofu Stew~. You’ve got to love the naming conventions here. It’s a piping hot soup with soft tofu and pork belly slices riffing on the spicy bean flavours of mapo tofu––a thin but flavourful broth that’s perfect for cold weather days. It’s not very spicy at all. Our only gripe is that it doesn’t come with rice, but it does leave you room for ordering other dishes. 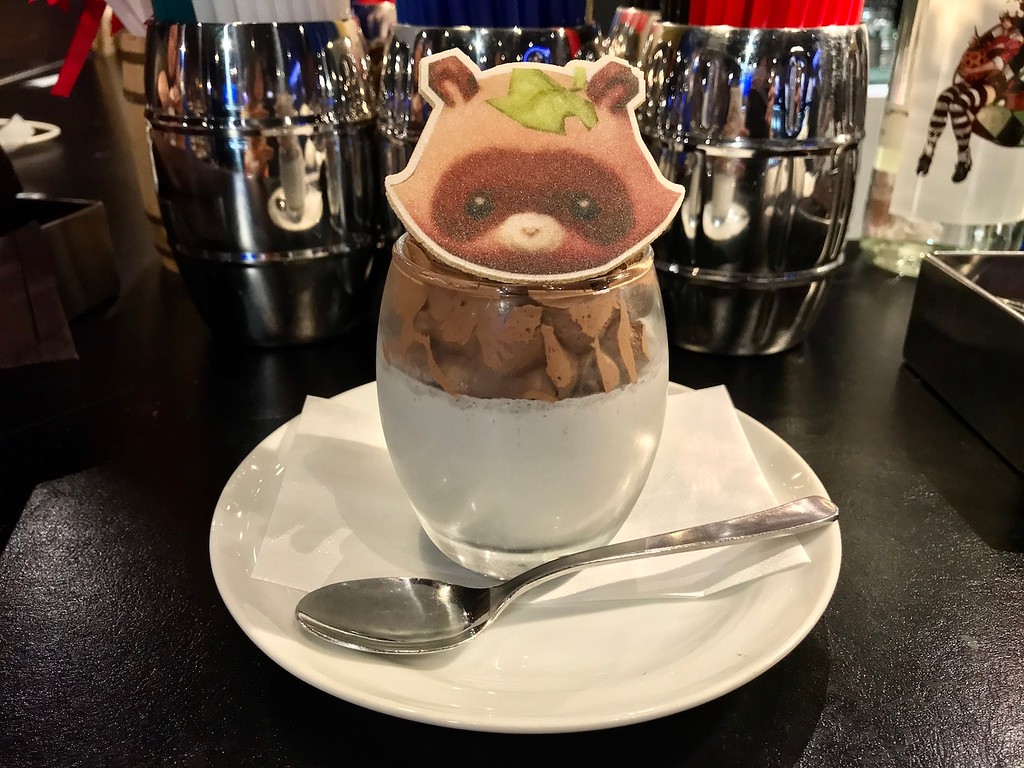 The pudding is extra cute with a raccoon picture on it. - image © Florentyna Leow 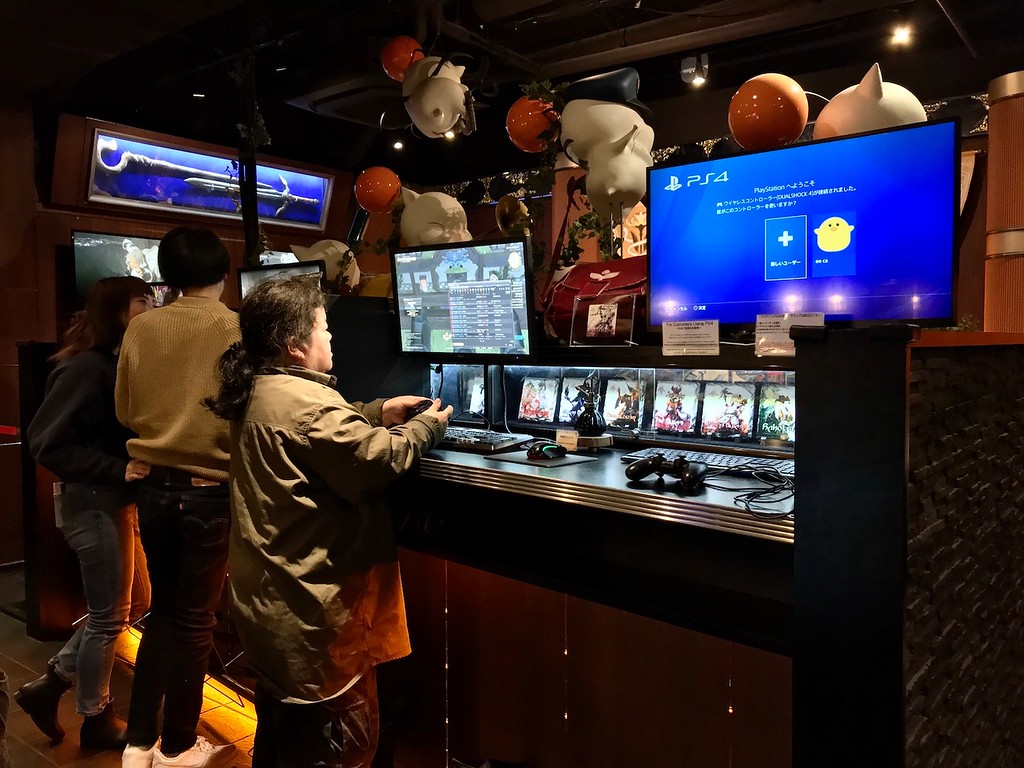 Eorzea Cafe even has a few computers and a PlayStation for visitors keen on playing some of their favourite Final Fantasy games during their visit.

Buy official Final Fantasy-themed goods next to the counter at the entrance. - image © Florentyna Leow

After your visit, don’t forget to stop by the official merchandise store just outside to pick up some swag. Final Fantasy-themed socks, soft toys, or key covers make perfect Christmas gifts for your favourite gamer geek. 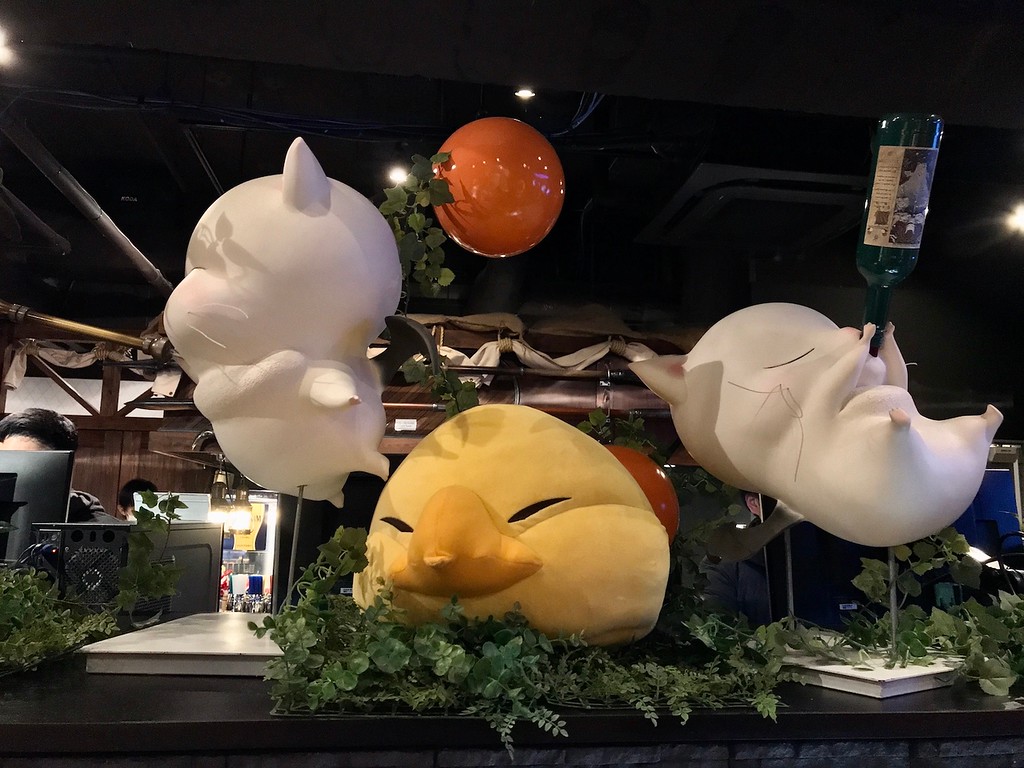 Floating moogle statues in the center of the cafe. - image © Florentyna Leow

Is Final Fantasy Eorzea Cafe Worth It?

Final Fantasy Eorzea Cafe is perfect for people who are already fans of the media franchise. Game lovers will appreciate the attention to detail when it comes to the decoration and food concepts, and it will most likely be a must-visit on your travels to Japan. If you’ve never played any of the games or watched the movies, it will probably be more difficult to enjoy your time there. 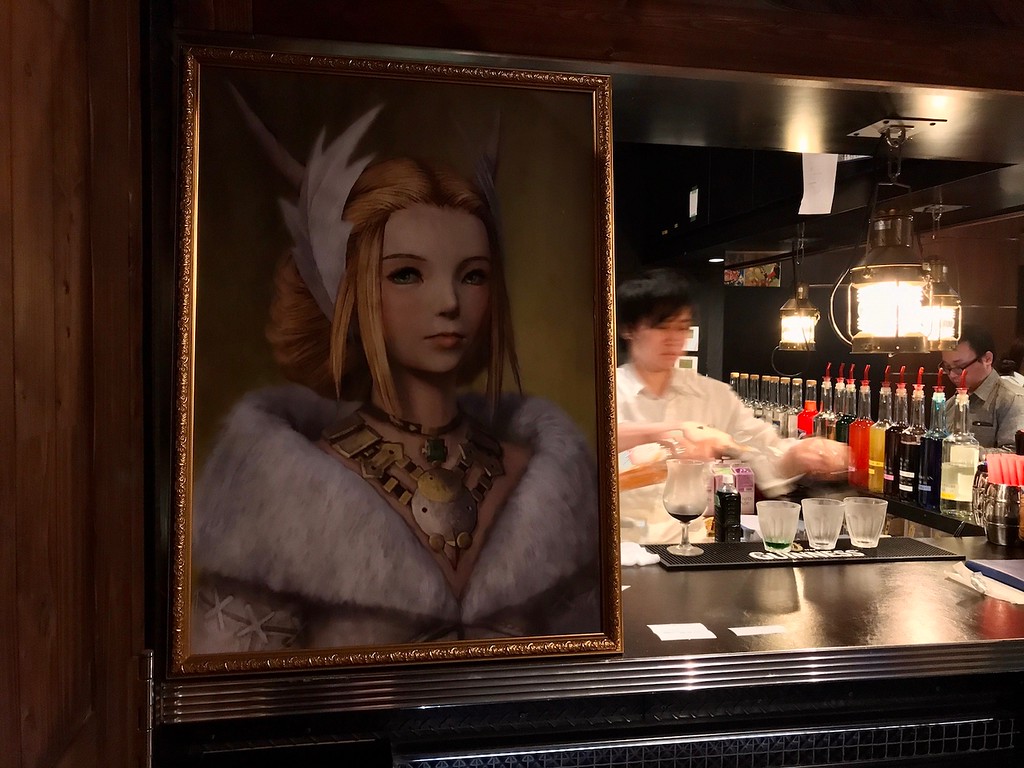 A painting hanging right next to the entrance of the cafe. - image © Florentyna Leow

Eorzea is also best visited with at least one other person, and preferably in a group. It helps to have more people to eat your way through the menu! It’s no gourmet experience––the food itself is decent, not great––but sipping on a variety of colourful, sugary drinks and swapping dishes is a lot more fun with friends.

Admission:
JPY4,100 by purchasing online, or JPY1,000 by purchasing from a Loppi ticket machine at Lawson’s.
Nearest Transport:
Train: 3-minute walk from the Electric Town exit of Akihabara Station on the JR Yamanote, Sobu, Chuo, or Keihin-Tohoku line.

Near To Here:
Final Fantasy Eorzea Cafe is located in Tokyo's Akihabara district. See our complete list of things to do in Akihabara, including places to eat, nightlife and places to stay.

Where Is This Place Located?

See this place on the Truly Tokyo Google map: