Yokohama is Japan’s second-largest city. The central areas can be explored on foot, but trains, taxis, and buses allow you to cover more ground quickly and easily. Here are all the details on getting around Yokohama.

Under the bridge: sakura cherry blossoms and sightseeing bus at Yokohama

Most of Yokohama’s main attractions are clustered in the downtown areas of Minato Mirai, Chinatown, and Yokohama Station. It’s easy enough to walk from one area to another, especially if you’re skirting the waterfront. However, if you happen to visit on an inclement day or if you’re tired, the city’s train and bus system is very convenient.

If you want to cover as much of the city as possible in a day, you may wish to consider buying a Minato Burari day pass. This costs JPY500 and covers the city’s blue line subway and buses. The highlight is unlimited use of the Akaikutsu or “Red Shoes” bus. This is similar to a “hop-on, hop-off” bus which runs on a loop around the city’s major tourist attractions. It’s a good way to save money on travel.

At present, using the pass can be a little challenging for non-Japanese speakers to navigate but we hope that changes soon. More information, including a map of trains and buses covered, can be found here.

Otherwise, you can pay per journey. This is best done with a prepaid IC card such as Suica or Pasmo, which can be used on almost all trains, subways, and buses in Yokohama.

As we outline in our How To Get To Yokohama page, travelling between Tokyo and Yokohama is best done by train. Once you get to Yokohama, taking the subway between places is pretty convenient if you prefer not to walk too much, although you may like to use them in tandem with the city buses for expediency. 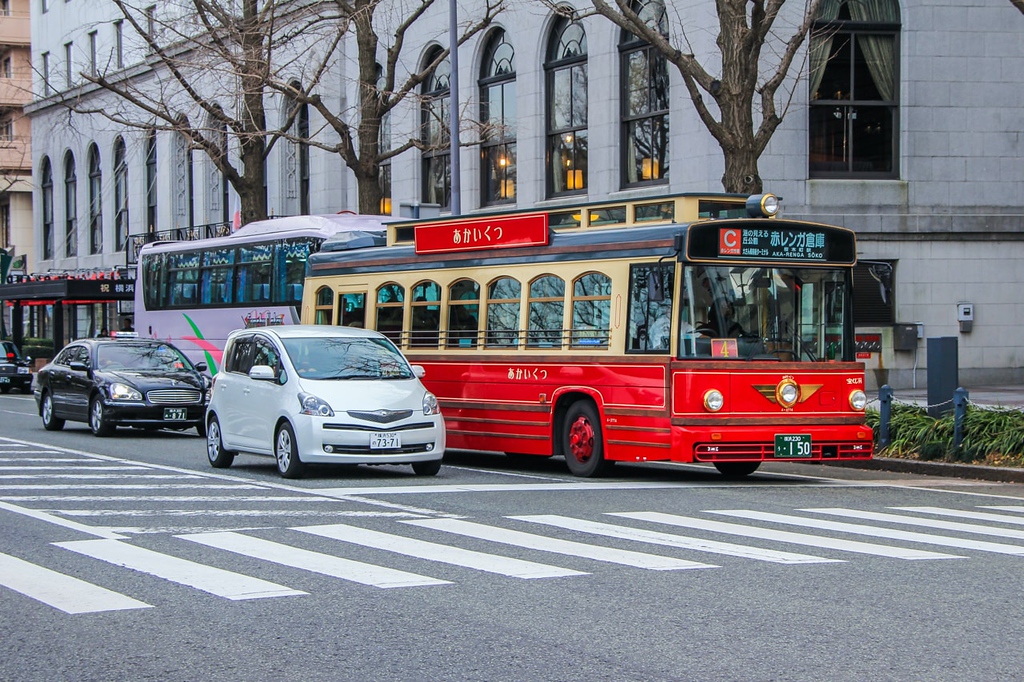 Yokohama City operates a bus service designed specifically for tourists that makes loops around the city, stopping at most of the major attractions. This is the Akaikutsu or “Red Shoes” Loop Bus, which begins and ends at JR Sakuragicho Station and runs in one direction only.

Pick up the Minato Burari day pass mentioned above for JPY500, which gives you unlimited use of the buses and the blue subway line. Buy the pass at the East Exit of JR Yokohama Station or the Tourist Information Centre in JR Sakuragicho Station.

As in Tokyo, taxis in Yokohama are generally easy to find but not a particularly cheap mode of transportation. Most taxi rates begin at an astonishing JPY730 for the first 2km. If budget is a concern, we suggest sticking to trains or buses.

This is a fairly novel if slightly more expensive way to see Yokohama. Board the charmingly-named Seabass, which takes you between the Yokohama Bay Quarter, Minato Mirai, and Yamashita Park. A boat ride costs between JPY440 and JPY700 depending on your destination. Boats depart every 15 minutes or so.

Yokohama has a bike-sharing system with docking ports in a few central areas like Yokohama Station, Minato Mirai 21, and the Chinatown area. The bikes are power-assisted, making it super easy to travel around. Rent at one of the docking ports. You can either go for a membership plan (which requires registering with a credit card) or pick up a 1-day pass (which requires bringing a passport). Both methods are rather fiddly, but if you really want to cycle around Yokohama, it’s not a bad option. Find out more here.

Alternatively, more energetic travellers might like to check out Cycle Travelation, which rents out road bikes and sport-style MTBs. It’s a good option if you’re used to cycling and keen on covering longer distances.